Warning: count(): Parameter must be an array or an object that implements Countable in /home/c420vape/public_html/wp-content/plugins/commercegurus-toolkit/includes/metaboxes/cmb/init.php on line 746
 420 Vape Juice | It's Time to Relax with 420 Vape Juice
Affiliate Program Customer Service Account

If you’re one of our loyal customers, then you know what we’re all about: we want to provide safe, health-promoting products to improve your quality of life in a world that’s increasingly stressful and time-constrained.

And if you’ve been vaping with us for a while, you’ve heard some of the kerfuffle surrounding CBD and the question of its legality. If you’re worried about it at all, if you get a little nervous when ordering from us online, and you’re living with the subdued fear that one day the DEA is going to show up on your doorstep talking about controlled substances, asset seizures and prison sentences, we have one word for you: Stop. Breathe. Ok, that’s two words, but seriously—you’re fine. In short, the product that you purchase from us—CBD, or Cannabidiol oil— is perfectly legal, in all 50 states.

The confusion comes from the name of its source plant: Cannabis. Many people, upon hearing that word, think of joints the size of their thumb, Cheech and Chong movies, or that group of kids they knew in high school who wore dreadlocks and tie-dyed shirts and greeted everyone with slow, droopy-eyed geniality. Slackers sitting torpid on a sagging couch, stuffing handfuls of Cheetos into their slack-jawed mouths. But what they don’t know is that there are different types of cannabis. There’s the type we’re all familiar with, Cannabis Indica—weed, pot, marijuana, etc.—good for convincing partakers that their most innocuous comments are frighteningly profound, and for inspiring eccentric feats of back-of-the-fridge gastronomy. Then there’s Cannabis Sativa, more commonly known as hemp, the source of many a finely woven, itchy sweater, but also of the medicinal compound known as Cannabidiol, or CBD. Both Cannabis Indica and Sativa do contain THC—that’s the psychoactive chemical in pot that makes pickles dipped in peanut butter seem like a good idea. However, both strains also contain CBD, the compound which many users credit with the numerous health benefits of which you, dear customer, are well-acquainted. The difference is that, and this is where the issue of legality comes into play, the THC levels in Cannabis Indica are high as, well, high—while Sativa contains a nearly undetectable amount. So, processed industrial hemp must have no more than 0.3% THC content to be considered legal. From Cannabis Sativa comes industrial hemp, and from there CBD, and from there, into our inventory and into your vaporizers. So yes; it’s legal. How we got here is a fascinating story; I’ll try to be brief:

Once upon a time, cannabis was the devil.

Have you seen ‘Reefer Madness‘? Oh my God, have a laugh.

It’s a 1930’s exploitation film made from a PSA about the dangers of “marijuana addiction,” the effects of which can, in the lurid inaccuracy of this movie, lead to acts of violence and depravity. Based upon the kind of uninformed, unfounded fears this film was trying to cultivate, the U.S. government pretty much just plugged its ears and stamped its feet whenever anyone mentioned cannabis, up until 1971. That’s when Canadian scientist Ernst Small decided, based on no conclusive evidence whatsoever—perhaps because his dog had chewed up his favorite pipe and Ernst was in a bad mood about it—that he was going to set 0.3% as the THC level at which “hemp” could be distinguished from cannabis. It was a completely arbitrary decision, but it stuck, and became law, and after decades of restrictions, loopholes, and intricate dancing around the issue, here we are. Since the levels of THC in Cannabis Sativa are nearly undetectable, that’s what we use for CBD today. To further allay any uncertainty about the legality of CBD, a bill that passed recently—The Agricultural Act of 2014, aka “The Farm Bill”—contains a little phrase, buried deep within its legalese, that states: “None of the funds made available by this act or any other act may be used…to prohibit the transportation, processing, sale or use of industrial hemp that is grown or cultivated in accordance with section 7606 of the Agricultural Act of 2014, within or outside the State in which the industrial hemp is grown or cultivated.”

This provision, allowing for hemp to transported, processed and sold freely within the 50 states, means that you and I can enjoy CBD without qualms, in public or private.

If 420 Vape Juice had a physical location, there’d be a line wrapped around the block as if Apple had just announced its newest iPhone could transform into a hoverboard and came with free healthcare! 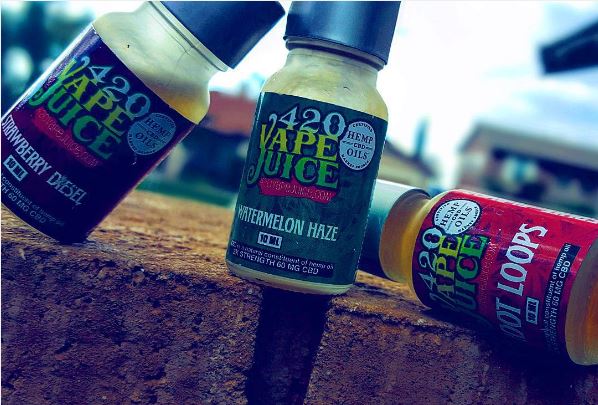 We’re pumped to announce that our new line of 100mg CBD e-liquid is here! It’s the same top-grade quality you’ve come to expect from our other concentrations, the 30- and 60 mg, lovingly crafted with the same care and attention to detail that has made 420 Vape Juice your go-to e-liquid supplier for years.

Yes, you’ve been asking for it for more than a year—maybe you thought we weren’t listening, but we heard you, all the way up the ladder to our top brass. Rob Johnston, our Director of Operations, said this: “Raising the CBD concentration was important to us because high concentration CBD products are sought after by the general public and we want people to be able to safely and legally experiment with CBD in their personal health regimen.”

So all this time, we’ve been busy concocting the perfect response to your demands. Here’s why it took so long for us to bring it to you:

100 mg per 10 ml bottle is an extraordinary jump in potency from 30 mg per 10 ml. We’re talking, like, 66 percent. And while we could stuff that higher concentration in a bottle and ship it, and you could reap the benefits of a nearly 70 percent increase in Cannabidiol extract. The simple fact of the matter is that an infusion of 99.999% pure, cold-pressed, industrial hemp oil just doesn’t taste that great by itself. And 420 Vape Juice is not going to sell you a product, no matter how effective, that we don’t think you’ll enjoy vaping. Because otherwise, what’s the point, right? So we took the time to dream up a panorama of nuanced flavors, experimented with different combinations and concentrations, and elevated their intensity to balance out the potency of the 100 mg CBD liquid. The result? A new e-liquid-gold standard of excellence in CBD vaping.

Now you can enjoy an enhanced level of CBD benefits—using less juice. No time for a long, relaxing vape session to help you achieve the centeredness and well-being you need to be your best, most productive self? The higher concentration is perfect for shorter, periodic vapes throughout your busy day.

As always, we here at 420 Vape Juice are committed to improving your state of being by offering you a range of reliable, quality-tested products that complement your personal lifestyle brand. Our CBD e-liquids can be enjoyed with any low-voltage rechargeable vaping pen, and are available in a palette of flavors: Mango Kush, Dank Dragonfruit, Strawberry Diesel, Pineapple Express, Krankin Kiwi, Blueberry Dream, Bad Ass Banana, Ice Cold Menthol, Amaretto Coffee, The Purps, Fruit Loopz, Watermelon Haze, and Bubba Kush. Relax, it’s 420.

THE NEWEST PRODUCT FROM 420 VAPE JUICE

Why did we choose a wax form for our newest product? The potency and strength of pure CBD extracts usually come in 2 forms, wax or CBD Vape oil. Our new regular and maximum strength 420 Dabs are in and come in 24% (240 mg) and 18% (180 mg) wax in each 1 gram container.

END_OF_DOCUMENT_TOKEN_TO_BE_REPLACED

HOW TO USE CBD VAPE OIL IN VAPORIZERS

Where to begin? You want to try CBD Vape Oil but don’t know how to use cbd oil in vaporizers? Follow these tips on using oil vapes!